Voice for the Voiceless

MY HEROES
So to hell with media magnets like the Kardashians, Justin Bieber, Miley Cyrus and a slew of "celebs" grabbing at the spotlight day after day.
I know a young woman named Allie, she'd drive a couple hours one way to a High Kill shelter and sit with dogs that were going down that day. I found this out when i asked why her knees were sore - from kneeling, being low to the ground, for hours. I wanna see news segments, a series episode, talk show appearances featuring someone like Allie and so many of the nameless who struggle for decency for the dying. Show mercy to the doomed. Women who walk the cages and spoon out compassion from a tin can. Andrea writes endless story-like pleas for South Central innocents and Katya strolls rows of kennels to find the right dog for someone who can't go in and face what she does. Paula sends out pix and asks for another round of networking for West Valley hopefuls. Chela craddles the medical pups, gets video and writes moving words hoping to find rescue, Carol & Jennie type up endless dog descriptions and beg for transport donations for little off-the-map Wasco, Delano & McFarland.
Give me two minutes and I'll give you ten more names. Even a few guys go into cages to give their heart and soul. These unknowns are truly inspirational. You won't find them clamoring for credit, they are self-effacing, modest and brave. This is who America should celebrate. Who needs the empty and vacuous, the materialistic and unbridled ambition of egomaniacs screaming for more.
Move over Lindsay Lohan, put these dedicated volunteers on tv screens across this country. Against all odds, they fight. 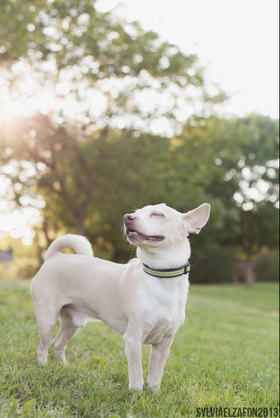 photo: Sylvia Elzafon
"In a world older and more complete than ours they move finished and complete,
gifted with extensions of the senses we have lost or never attained,
living by voices we shall never hear." - Henry Beston
Back to Art From The Heart
mystorytails